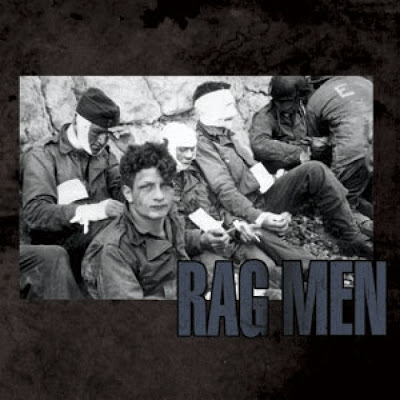 
Oh look it's DMS crew being all up in your face again. Where did these guys come from? I bet they're opening for Vietnom tonight. Great, just what I paid to see. A bunch of fat fucking muscular men in their thirties moshing with bandanas, wife-beaters, chairs, garbage cans and tables.  A bunch of soldiers in army shorts and bare chested tattoos. One crew member almost ate me when I looked at him wrong after being smoked in the face by a fist coming at 60,000 rpm and now my nose is missing. All these fat fucks won't leave me alone goddamnit. I tried stuffing my face with Big Macs for months and I simply can't weigh myself to their proportion. I guess I wasn't born to appreciate the music of Rag Men, played by men in rags. Or men on rags, whatever, same shit different hardcore kid. They're all pissed off as if something's stuck in their vagina and their lyrics are all about vendetta on someone who has caused them wrong in life. I don't know how these "rag men" make any fans if they write music about making everyone an enemy they can. Anyways, I'd like to join DMS some day to validate my life with some higher meaning. But it just isn't gonna happen so now I guess I'm just gonna get my ass kicked for this blog. Oopsies, uhh, what I meant to say, Rag Men, was that your music is great and I love the wounded veterans on the album cover. It reminds me of the aftermath of all the innocent bystanders standing at the side of the pit during your shows.