Skycamefalling - To Forever Embrace The Sun 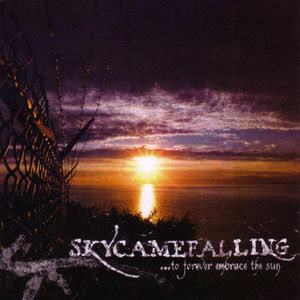 
Whenever the name Skycamefalling comes around on the internet anywhere, all the old school kids from 1999 to 2001 gets an immediate fucking boner and start talking about the good ol' days of Hellfest as if it validates their scene seniority ("sceneiority"). The popular topic associated with this band is their groundbreaking LP of "10.21" that was a testament of its times in 2001. Well guess what faggots, here is the EP even before that. I'm older than most of you fat and elite hardcore ogres. I've been windmilling before you guys could even walk or draw in circles. I've been picking up change before you've been begging for allowance from your parents. I've been stage-diving before you guys could jump off kiddie-diving boards in the shallow ends. I've been ... well, ya know. I'm top motherfucking king shit. Here's their EP of 1999. Go swap flies to this. Also, I've seen some loser who posted a tattoo that says "...to forever embrace the sun" across his arm. I'm glad the phrase means so much to you, idiot. You should go on some serious environmental protests with that phrase visible at all times. Maybe then people won't pollute the ozone layers so much. Such significance on your arm bro, I applaud you for changing the world.

Email ThisBlogThis!Share to TwitterShare to FacebookShare to Pinterest
Band(s) Skycamefalling