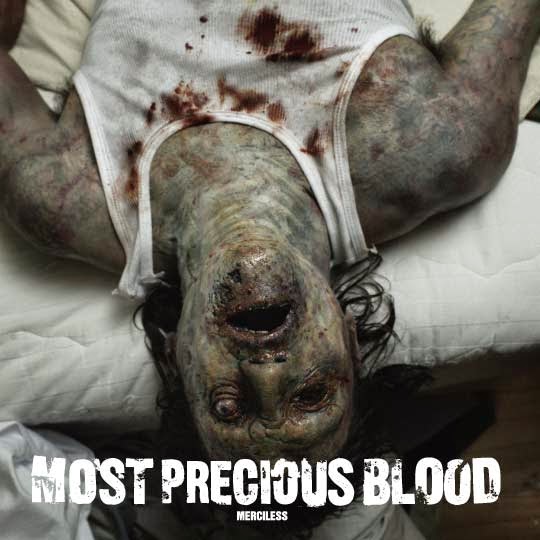 
When bands do an album release with some repulsive, attention grabbing shocker image as this one, you tend to wonder what their agendas are in trying to shock you. Is it because their music fails to sell as music itself? Or is it because they are trying to subliminally shove some quasi political or philosophical views down your throat? With Most Precious Blood, it's probably because most of them fight on some Animal Liberation front. They are obviously trying to convey to you that this is how grotesque decaying human meat would be on a cadaver, and if you find this to be a shocker and you eat meat, then you are being insensitive to animals therefore no better. Thanks for the wake-up call on morality, assholes. I remember Cattle Decapitation albums doing it more effectively because at least they're funnier. What PETA organizations do in my city is they camp out on our largest shopping center downtown with projection screens on how factories butcher animals prior to the processing of their meat, in the hopes that you are traumatized for life. It fucking sucks because I never asked to view it in the first place. Imagine the families who go out and about with their five year old kids on a Saturday morning's unwillingly subjected to the disgusting views of their propaganda. Their kids are probably getting nightmares every time their parents put something on their dinner plate which they have no control over nor ask for. PETA? More like PTSD, you fucking insensitive fucks. Let me shop in peace without being unwilling subjected to watching some inbred redneck hick pulling out intestines from overgrown cows that most probably resembled your highly abusive mothers when you were all young.

Email ThisBlogThis!Share to TwitterShare to FacebookShare to Pinterest
Band(s) MOST PRECIOUS BLOOD