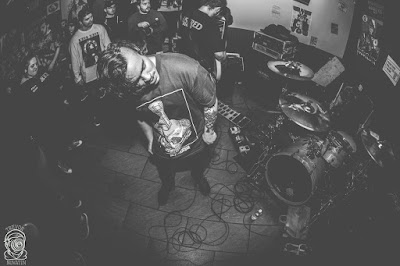 
One of the funniest and most pathetic things a band can do to start some sort of sensational hype or rave amongst their clique is to invent some sort of new 'genre' to distract the fact that their music sounds exactly the same as their peers. Hardcore is the most obnoxious at this nonsense. In the early 2011's it was about hardstyle, some bullshit quasi-tough-guy quansi-thug bullshit genre which consists of simply chug chug riffs with a vocalist that followed the grooves of hip-hop (see: Warhound... LOL). Now an even-younger generation in the 2017's are investing a new style and you can hashtag-search #Swingstyle on Twitter. These ridiculous subgenres are absolutely endless. A creatively bad distraction from the fact that your new genre of music actually sounds exactly the same as every other band you play with that doesn't call themselves your genre. What the fuck exactly is a #Swingstyle you goddamn morons? Is it that obnoxious twat going side-to-side while swinging to every second bar from the crash to the snare (while everyone else does exactly the same at every show to every band)? Whoopdy-doo you asshats, what a brilliant innovation of music and dancing as if it hasn't been the same way for at least ten or fifteen years now. Way to market yourselves as different when you sound exactly like every other single-kick DIY-looking ordinary hXc bands to painfully hit the market this terrible day and age. The only difference is, you're trying to be different while being signed to Rise records yet desperately distancing yourself from metalcore. And that's all these bands can ever do to distinctively identify who they are. You ask 'em "what sort of music do you play?" and they're like "uhh well, we're certainly as hell not metalcore..." Well fucking retards what the FUCK are you then? Some shitty fucking drop-tuned garbage that resembles a crossover between 2000's hardcore and nineties metal? Technically. But what's important is you're 'not metalcore'. Real original you fucking idiots. Check out our new swag! Not metalcore, but exactly not unlike nineties metalcore. What a difference of flavour to what history has brought us.

Hardcore kids are one of those things where you grew up committed to such an esoteric and socially retarded niche scene that its norms, bands, and practices are all you've ever known. Then you hit your late twenties and realized half of the more successful people have moved on with their lives and became contributive to society and you're this socially handicapped moron who cannot goto a company event without feeling awkward when your superior hands you a glass of wine. You don't attend social outings. You cannot sing along to a single radio song when you date a non-fat bitch outside the scene. Your politics are extremely conflicted. You cannot even entertain a normal conversation with people, when they ask you something as trivial and mundane as "what's your favourite band", "what kinda music do you listen to" or "what does your shirt mean?" And deep down inside despite of all this 'I am hardcore' nonsense you're probably having an identity crisis. The tens of thousands of dollars you've ever spent on shows your whole entire life has gotten you indeed nowhere in life and you refused to admit you wasted all that money because secretly you know you're privileged but yet act like you're from lower socio-economic stratification. You don't stand out with your vinyls and limited print shirts when you goto big cities because nobody even looks or understands any of that. All you do is reminisce the "good ol' golden age" when Blood In Blood Out could draw 100 people to shows. Give it up, you fucking pathetic cynics. Sometimes, it's good to snap out of denial and accept things as-is. It's the year 2019 and there is a pit-bottom to how low one can sink, and the person holding down the bottom of that pit is none other than you.

Retweet this you dumb fucks

Email ThisBlogThis!Share to TwitterShare to FacebookShare to Pinterest
Band(s) Downswing