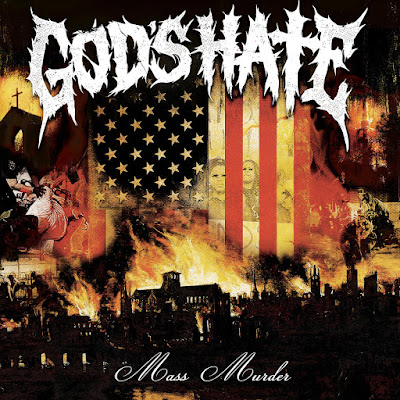 
Oh yeah. That's what America needs. Another album and artwork depicting mass shootings, flag burning, civil instability and anti-patriotic dysphoria. Totally not a bunch of cliche subjects to sing and showcase about you fucking greasy fat-ass fools. Love it when these Carcass and Candlemass worship bands have nothing better to preach about because they aren't able to get over the nineties, musically as well as in terms of the dysfunctional civil society it was. I have no reason to believe shit is getting better any day now, but can you possibly imagine how much worse things could have descended into on a global scale with Clinton's abhorrent presidency? These asswipes live in Los Angeles and just try to imagine Hilary replacing the border walls between USA and Mexico with a expensive red carpets while deliberately welcoming them in. I will laugh my ass off if her policies merged the US of Mexico as one nation and all the wetbacks infiltrated her Chappaqua residence and ran a fucking shishkabob train on that filthy fucking tramp and ended her god-despicable life afterwards. Want to examine into Mass Murder boys and girls? Look into Benghali. Look into what she did with the US troops. How do people not see this stupid sociopathic bitch in sheep clothing for whom she really is? A complete demonic tramp who commits genocide on her own American people while preaching like a saint. End your life you fucking democrat supporting shedevil prostituting whores. Open up our borders just a tiny bit more and watch our get taken over by MS-13 that are running the kind of cocaine that's up every liberal politician's nose. It's okay, these political groups must have enough out-of-touch young & naive white girls for these filthy nomadic cartels to exploit. Let's see how the Clintons love it when every one of their fugly tittiespanked daughters get molested and exploited by spics and wetbacks alike.