Wolfpack - None Above None Equal 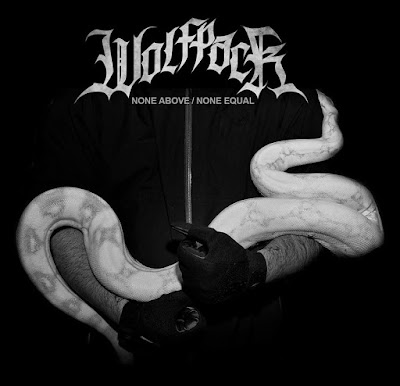 
It's funny how these hardcore & metalcore bands always have these interesting and funny album titles that are obscure and require intensive analysis in order to figure out what it actually means. Since white cracker ass wimps with upper-middle class earning and privileged music lessons are too scared to be blatantly obvious with what they are trying to say, allow me to bluntly infer what an album called 'none above, none equal' means on a sociological level in this day and age.

Socialist warriors, the regressive left, and blacks love to have a parade over how there's still none of them are above the status quo of white men in America, therefore none of them are equal when placed in comparison with the well-to-do. Any fucking moron would see this as simply a cry for handouts in exchange for doing absolutely nothing. As hispanics and blacks are failing their primary and secondary schools at an incredible rate and whites and Asians still remain passing and often with flying colours, the stupid fucking socialist warriors and regressive lefts and mostly blacks attempt to argue that it has nothing to do with the inferior average IQ that is genetically predisposed on their people at an average rate. But rather it's because we as a society are unethical to amalgamate them into our western institutions its remarkable system of education. They regard this privilege as rather an act of oppression. Therefore blacks (and many hispanics) on average as a whole end up failing because we forced this coersive, politically incorrect oppression upon them. Therefore it's OUR fault that they fail school, work, and life on a massive scale, and get sentenced into our penitentiaries, all because WE imposed a western style of education that has been successful for centuries until one day somebody made a stupid fucking decision to free the blacks from slavery and open up our borders to inferior subhuman apes.

But we still continue to apologize. White apologists suggested afterwards that perhaps it's better to build AFROCENTRIC schools. A school full of fucking filthy jungle niggers. To prove that negroids are capable of succeeding in education that FITS THEIR MOLD and not cater to our forefather's school system that is oppressive and dehumanizing to them. As a society we said fine. So we spent a ludicrous amount of public's tax dollars to build these faculties and facilities for these chimp monkeys to study together, and sleep/breed/commit crimes together, while hoping for a better outcome with their quality of education. Lobbyists that preached for this plan to happen obviously got lots of money tied into this agenda, so it automatically becomes political, and they'll do anything to prove to us that  afrocentric schools somehow apparently work. Yet knowing that blacks as a whole perform underwhelmingly in ANY school system, how can they prove these new schools work? By exaggerating results/outcomes and lowering standards of what these blacks learn.

The only reason why it's argued that black/afrocentric schools have been working well, at least in according to pro-afrocentric brain-dead morons, is that the public doesn't know what they are being taught... (i.e. nothing at fucking all). They can't put one and two together. They can't calculate areas of simple geometric shapes. Can't solve for x. Can't make code the simplest program to calculate an integer. They're hardly literate. All they do all day is hop around like neanderthals in an oversized gymnasium. Watch movies like American History X, and involving biologically-retarded figures like Obama and Harriet Tubman, and have fictitious discussions about how they're endless victims of racial discrimination and systemic injustice. Meanwhile, MIT's stem cell research faculties are finding cures to aids and cancer, Google is engineering holographic transmissions, and China is teleporting protons into space (no fucking joke). These fucking subhuman chimps are still there irrelevantly discussing about how an underground railway transported plantation members from the south to the north 200 years ago.

These poor fucking idiot students grow up indoctrinated with how their forefathers have faced injustice their whole entire life, and yet they have no real applicable knowledge to go with their diploma after graduation. They land themselves low-paying desk jobs and unable to spell, write, or use any excel platforms. Then they get laid off and have a shitstorm about how their employers are racist and this becomes some overnight tabloid sensation with cancerously bullshit fake news like Buzzfeed and Huffington Post. The public has never been once told that students of these schools succeed in life even LESS after graduating, because their terribly incompetent afrocentric schools has never taught them ANYTHING applicable the entire curriculum of many years wasted.

The only real positive effect these shitty fucking abhorrent tax-draining schools ended up doing was segregating the blacks from going to the same school as whites, something Martin Luther King apparently tried to fucking do the opposite of, because apparently in according to that goof, whites and blacks ought to be integrated as opposed to using different booths of services. Oh the irony. But that's fine though because no white father truly wants their daughter getting raped and killed by their black ex-boyfriends who are highly abusive drug dealers. No white kids ever succeed hanging out in black circles. No robberies and drive-by shootings 24-7 and selling drugs in front of every corner block within five miles radius of an otherwise perfect neighbourhood. No declining house values. This is great. Maybe we should segregate them all over again, so that coloured uses coloured facilities. Whites will finally get their space again, so they aren't walking on eggshells with everything they do and say, and getting raped or shot on a daily basis.

Blacks have always cried about the lack of integration. Then you integrate them into our school systems and they fail. Then they cry that it's because we are assimilating them so now they want segregation. But once segregated they are still crying that they not fitting into the overarching society's mold. How the fuck do you win with these people? How?

Email ThisBlogThis!Share to TwitterShare to FacebookShare to Pinterest
Band(s) Wolfpack