Buried Alive - The Death Of Your Perfect World 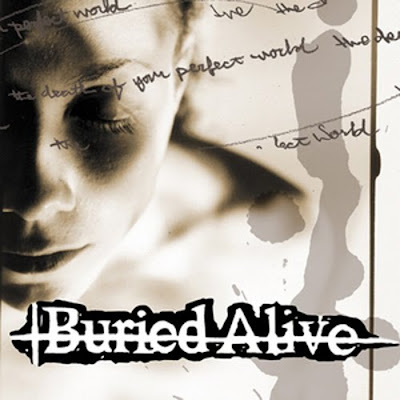 
Scott Vogel was the vocalist for this band in the nineties before he became the notorious lead vocalist for Terror. I ridiculed him about this last time they came in town. I was like "sick band dude, too bad you've been broken up for over ten years". He looked at me as if I was insane and said "what are you smoking bro, we're headlining the night". I was like "No you guys have been dead and buried alive remember?". Then he looked at me as if he was going to headbutt my nose open with his big shiny scalp. Nonetheless he's been an angry icon for the hardcore scene forever now I suppose. I remember catching these guys in in earlier Hellfests. Yeah, they brought hell to Hellfest all right. Hell to my fucking ears and safety when all I wanted to do was stand aside cross-armed while watch the fucking bands like a bitter and jaded asshole I am. Instead I got hit by assholes that were more bitter and more jaded than I was. Assholes!