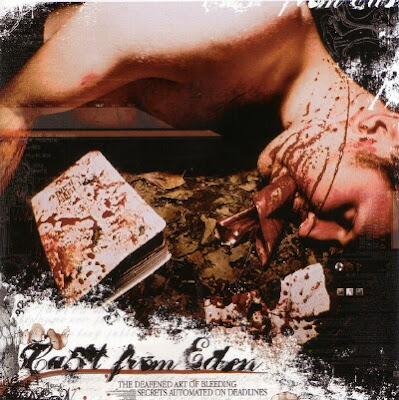 
This album dates back as far as 2001 I believe. Horrible quality Black Dahlia Murder-esque metalcore. Although the music is great, I sort of wish it wasn't recorded in a motherfucking basement or attic on Windows 95. But of course it's an artifact for prehistoric hardcore kids around the world. Especially if you're an Amish or a Mormon. Oh God. Log off the internet already you fucking losers. By the way, lovely dead girl on the picture. I'm sure all the radical feminist organizations around the world won't throw a hissy fit over this violent image. I can just imagine girls coming to this band's show back in year 2001 and expect to have some sharp object penetrated right through their oral tunnel. Considering all metalcore scene bitches are whores anyways, they would obviously prefer a penis instead. If it's anything sharper it would automatically be unpleasant. The music itself is pretty okay though, I would definitely goto a show and bang all the members if I was a slutty female (which I pretend to be every year at my local drag parade...)

Email ThisBlogThis!Share to TwitterShare to FacebookShare to Pinterest
Band(s) Cast From Eden