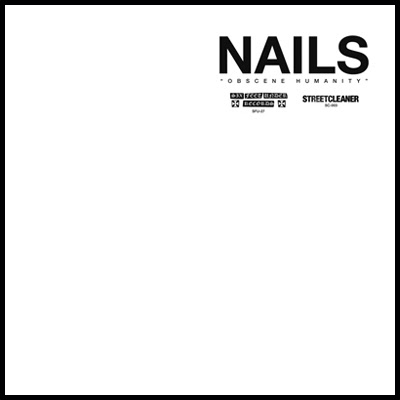 
It's undeniable how heavy Nails is. But I don't understand how every fucking DIY hardcore/sludge band has to design and market themselves as if they were technologically illiterate and practicing in a fucking cave all their lives. I understand as your sound matures with age, vivid imagery and aesthetics play less of a crucial role in your band's promotion. But still, why the fuck does your album art and t-shirts look like it's been done by a seven year old playing with Microsoft Paint, I will never know. Like look at this fucking album. I can create that on Paintshop in two seconds blindfolded and without a proper working mouse. I've seen sixteen year old's four track EP's designed with more integrity and care than this piece of visual horseshit. This is fucking retarded and everyone who works at Six Feet Under records are a bunch of lazy, fat, and incompetent jerks. If I was to release an album, and my label made my CD cover by putting a stamp over a white piece of paper,  I would set that fat bastard's apartment on fire. No wonder why you never see this shit in Music World or HMV you dumbass faggots. This band doesn't even have a website. I guess obscurity and mystery sells these days? Maybe. But only to your ten fans in the world that's ever heard of you.

Email ThisBlogThis!Share to TwitterShare to FacebookShare to Pinterest
Band(s) Nails