EndThisDay - Sleeping Beneath the Ashes of Creation 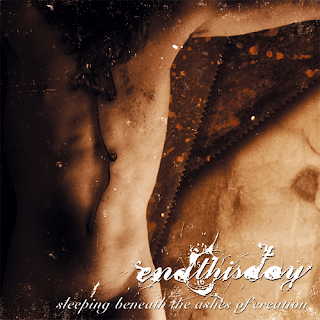 
Endthisday is the perfect example and explanation to why European death metal is better off being ripped and exploited by dumbass American teenagers. Even though they're imperfect in every single fucking way, At the Endoftheday the band still sounds so much better than At The Gates which they're accused of ripping off. I don't care about legacy or seniority but to compare American metalcore with Swedish Gothenburg melodic death crap is simply a compliment to any Eurotrash any day. I am so sick of metalheads complaining about how metalcore acts are raping Swedish death metal riffs as if it's all plagiarized. Yes, to a certain extent these riffs all sound the same in American metalcore but to accuse us to stealing your works is nothing short of ridiculous. Go cry about it you fucking morons. We polished and marketed your shit so much better than your stupid ass looking long-haired metalheads could ever do and that's the wonderful spirit of capitalism. Your hippie socialist nations obviously know fuck-all about it considering your healthcare is free and you're letting your land being taken over by radical Muslims ahahahaha. And I don't know why you critics always compare everything to At The Gates. Have you faggots even listened to a single album of theirs? Neither have I, jackass, I agree, they're completely intolerable. Thank the young Americans for putting those asswipes on the map, you stupid fucking horrendous gimps.

Email ThisBlogThis!Share to TwitterShare to FacebookShare to Pinterest
Band(s) EndThisDay