BETRAYING THE MARTYRS - BREATHE IN LIFE 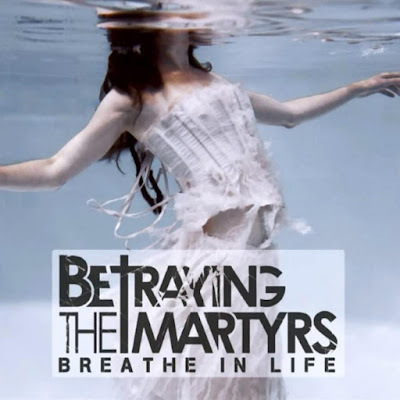 In retrospect when you look at these shitty prog-metalcore bands from 2009 to 2014 you must first figure out some of the following questions -- (1) what the fuck do their names even mean; (2) why are they not around anymore; and last but not least (3) why are some of the most prominent booking and tour agencies not around anymore, such as Warped Tour, which is now scheduling its last run next year in 2018. There are many more questions a semi-intelligent scene kid in their 20's may ask but for simplicity's sake we'll omit those questions.

The answers to the aforementioned three questions are relatively simple for anyone with half a brain. (1) They never fucking mean anything other than an artsy-fartsy literary play of words; (2) because band members are fucking each others' underaged girlfriends and realizing they needed a skilled professional designation from college in their twenties after making no ends with failed music careers; and (3) promoters never work together to make scenes thrive but instead work against each other in something destined to fail. It simply doesn't help that many of those then-high-school slut whores who used to sleep with their pedophile rock star idols now grew to their twenties and got a lousy liberal arts degree in feminism or international studies (LOL) realized they whored themselves to rock stars who didn't give a rat's ass about them. Unable to appreciate the fact that they're still nobodies, they use tumblr as a "female empowering" tool to decry against their former affair band members sexual assault because they once fucked after an all-ages show.

This fucking scene was never destined to go anywhere. This industry was condemned to fail. All these privileged suburban upper-middle-class tattooed-whores are what is causing the declination of this music community and ultimately the western empire. They are unable to compete with the fact that other genres, some as gay as dubstep and drum and bass actually, use internet to empower their scene and let people in. And that people actually go to shows elsewhere in the city and NOT feel a sense of discomfort from twitters and tumblr shit-talkers and ex's who are fucking others' ex's. You probably can't deal with the fact that other genres are actually communities with fans who genuniely appreciate each other and not grown-ass femme-children who decry band members for "sexual assault" the minute they turn 22 because they regret whoring themselves back in middle school. (And it's just as ironic as these women gradually grow out of the hardcore scene ironically they are simply doing the same to DJ's and touring personalities at trance and house clubs).

Grow up you fucking idiots. Enjoy the decline of the metalcore/hardcore fad that was never meant to be. Maybe when your families' mutual fund runs out you'll actually struggle to work to make a living and realize what it's actually like to establish real relationships and act like real fucking human being. Meanwhile enjoy the free album piracy because I love contributing to artists making no money off their shitty work.

Email ThisBlogThis!Share to TwitterShare to FacebookShare to Pinterest
Band(s) BETRAYING THE MARTYRS