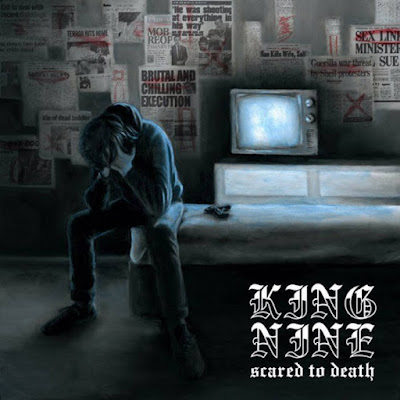 Scared to death? Damn fucking right you ought to be scared to death over what is happening around the world right now. The minute Putin drops his supersonic hypermissle that's capable of annihilating a whole developed urban metropolis the size of London UK into a barren wasteland full of ants and cockroaches, one ought to be frightened and staying deathly awake at night on high fucking alert. Vladmir Putin will PUTTIN IN the motherfucking work to dish out incompetent western liberal governments that reflect absolutely NO interest of their people. With Biden's debilitating dementia rendering in him incapable to react to even speedbumps and potholes ten feet away from him while driving, it's a wonder how he'll react to something coming his way in Alaska. Currently at the rate of decline the west is going in terms of its trajectory, simply admit to ourselves, there is nothing wrong with Russia and China taking over the world. As the mentally-aloof and complacent west stares into their VR Goggles living in their own stupid virtual metaverses, with their left hand twiddling an analog joystick and their right hand over their dicks, it will be wonderful for Russia to carry out an attack at such a wonderfully strategic timing. America is the only nation of its type in the world, where one can have pretty much everything and the opportunity to climb upwards in any social or economic stratification and yet have such a miserable majority of citizens distrusting of their government and not wanting to have kids (see also: our fertility/replacement rate of 2022). I suggest everyone memorize the Russian and Chinese national anthem and better learn one of the two languages. As the west gradually fails in the next 10 to 30 cataclysmic years, we will have to fill out refugee forms in the hopeful survival by migrating to another nation. Best part? Leaving all the niggers back here in our homeland as they're being fed by Uncle Sam's welfare programs.

Speaking of the multicultural paradise our blue states have become, no wonder why New York hardcore bands like Mindforce and King Nine put forth such albums about anger and misery. A product of society being driven by globalist wall-street oligarchical interests. Also it's funny because east coast bands are always a lot more expressive in their anger as they make no secret they are much tougher and have a whole lot more fire. (It just sucks that tough guy hardcore-ass men have premature children brains and cannot actually explain why they are angry: aside from the 'economic inequality' which is prevalent in any capitalist worlds across they globe they also have the highest unfortunate rates of dealing with racially incompatible animals (aka, that are non-white or orienta Asian) in their abhorrently disgusting melting pot societies). It's a wonder how a state with such high GDP can produce such displaced people and unhappiness at a rate where comparatively their southern neighbours in West Virginia has one of the lowest GDP's per state as well as capita and yet have much better qualities of lives.

I hope those yuppie-ass wolves of wall street can snuggle their pillows to sleep at night time with the resounding awareness of the world they helped to contribute. And we allow these Jewish oligarchs to do what they do (as they convince us a society of mixed races are HEALTHY societies due to some unfathomable to logic to common sense). Being scared to death is a practice in futility as we undergo the most extreme hyper inflation history has ever witnessed and Russia deploys new world order. Worry not comrade, a few nuclear apocalypses ever, if you ain't wiped out after migrating to a safer location within the world, you'll eventually come to realize that maybe it's for the best direction of mankind after all!