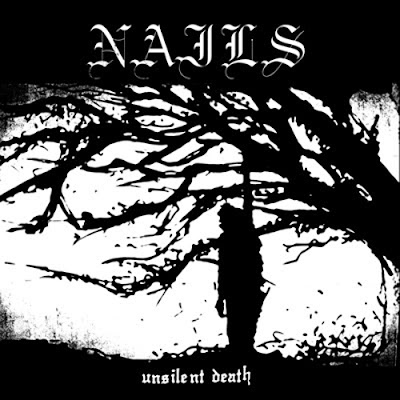 
Don't agree with me I don't care, but Nails is terrible. So it's a fucking wonder why I like this band so much. Looking at this album art, it is somewhat better than their previous release below this entry. At least it's a black and white image of some man hanging. It just happens that this man is black like the landscape around him. Does this mean this broke ass band is cheap and wanted to cut down cost on their album design, or is it because they are subliminally implying they are racist? I mean lynching and hanging niggers was such a century ago, I don't know why modern bands have to allegorically imply such a thing. And it looks like a black metal CD cover. Thank God I downloaded them for free. And God knows why they don't just get a vocalist. I hate going to shows and seeing hardcore bands without a designated vocal role. Not enough money to split among four people? Start working day jobs you freeloading slack-offs. I may try out for vocals if you guys want but I cannot guarantee that I won't rob the shit out of our touring van. Yah I'm just like that sort of person - I download my music free and I steal from other bands that allow me to tryout for a role. Someone fight me.

Email ThisBlogThis!Share to TwitterShare to FacebookShare to Pinterest
Band(s) Nails