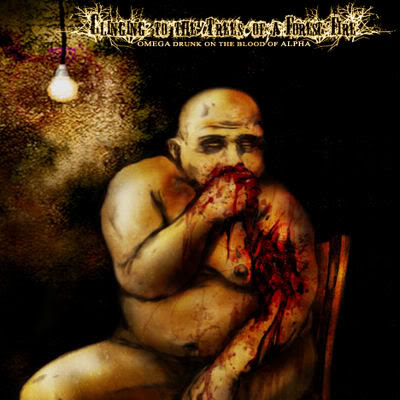 
So my last review of this faggot band's music gets me awesome publicity and uproar on their piece of shit Facebook page. This is great for the attention I've been craving for all my life being a fat loser overly picked on in high school locker rooms. Therefore I will continue to review all their albums because of my uninhibited gay love for them, being the repressed homosexual I am, you fucking faggots. It's a painful chore because I am not even going to get started on what the fuck this album cover is. It looks like the hairless drummer got too hungry after playing a show in a reclusive hickville and decided to cannibalize the whole entire band. How fucking grotesque and savage. After all they're like, anti-life or something right? Go figure. It would be a nice design concept if it didn't look like it was drawn by some fourteen year old Marilyn Manson fan on a Microsoft Paint that ran on Windows 3.11. That's not a surprise obviously because their production value is just about as worthless as the cover art itself. Looks like the band's been running on limited budget ever since 2008 because they cannot afford a vocalist either. That's another thing that really bugs me about this band. They don't have a fucking vocalist. So the fat ass guitarist has to scream into a mic stand while playing his faggot guitar. I wonder if it's because they can't afford one due to lack of market for the shit music they play, or is it like because there's no way four people can fit in a touring van? If latter is the case then you guys should fill the fat fuck up with helium, tie him to a rope in the back of your van and drag him around like a blimp. Don't forget to put an XXXL shirt of your band's ridiculous name on him for promotional purposes on highways. Awesome Good Year blimps are hard to find nowadays, this guy would be perfect. Anyways, I think this band would overcome their budget deficiencies if he simply did a porno video with the scrawny bassist, and make it completely viral. Yes, I'd be the first to download being the huge faggot I am. Yet at the same time, oh god what the fuck, that would be quite the most disturbing shit capable of traumatizing for years.

Email ThisBlogThis!Share to TwitterShare to FacebookShare to Pinterest
Band(s) Clinging To The Trees Of A Forest Fire