Foundation - When The Smoke Clears 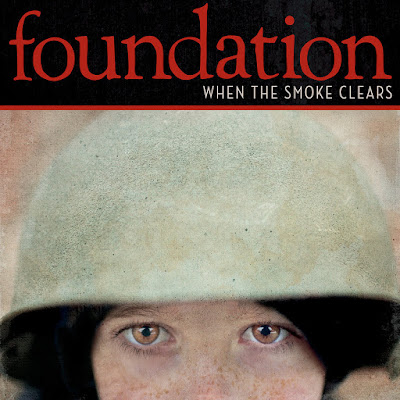 For the minuscule amount of dumb cock-riding broads who solely attend hardcore shows for the purpose of only hooking up with the men in that very scene, the amount of bitches who cry rape is sure disproportionately high. We all know stupid bitches aren't actually raped behind the scene. They consentually sign themselves up for the whored-out bukkake sessions with dudes who mosh the baddest and men who play in bands in order to ride on their clout. And when they are fucked-and-chucked and realized they've been used (as if they expected anything else to come out from any of these men) they use social media to make false allegations and blow little movie-dates into masochistic murder-rape scenarios. Then their fucking pitiful little self-help groups on the internet that band with them create an illusion that they have some sort of safe space to protect themselves against predators that they signed themselves for. And then it takes websites like metalsucks and lambgoat to proliferate these false quackeries because these articles that enable anonymous commenting will aid in click-baiting their websites. Everybody with half a brain-cell knows women just need to do anything within their power to drag other people down into their own level of misery because they are simply non-aspiring and complacent fucking whorish beings. That's why they can't ever play a role in the band that isn't completely talentless and gimmicky (vocalists/bassists lol).

Anyone remotely talented with anything (not just instruments in particular) knows that women cannot do anything right and are the sole destroyers of everything good to humanity. That's why tours and festivals get cancelled. Bands disassemble. Brotherhoods dismantle. All because stupid dumb bitches can't keep their trap shut from the malicious lies they exaggerate about to ruin men's reputation, livelihood and careers. Their existence is nothing short of abhorrent and i can't wait till niggers run buck wild one day and rape every single woman on earth to give them a taste of their own feminist agendas running wild. After all that's what these regressive leftist socialists want. Equality for people who don't deserve equality because they're unable to do good things with it. If women ran the world since the start nobody would have survived genesis because nobody would have even gone far enough to hunt/farm subsistence or find clean enough water to drink. Speaking of the stupid fucking testaments and such, isn't it eve that ate the fucking forbidden fruit as the loathesome tramp she is? No fucking doubt. Go cry another rape fable and put an end to another fucking band or man's career you fucking abhorrent bitches.

Email ThisBlogThis!Share to TwitterShare to FacebookShare to Pinterest
Band(s) Foundation